The vision of the University City Church of Christ is to equip God’s family to seek and save the lost, and to live holy lives by His Word.

The University City church is engaged in a work of love with the people of Las Casitas, Honduras.   It is a ministry that began in 2003 as a youth mission trip.  That summer, 26 members made the initial visit to the Baxter Institute in Tegucigalpa, Honduras, and spent a week ministering to the members of the Mateo Church and the Jovenes Del Camino Orphanage.  Since that auspicious beginning, UCCC has been involved in expanding its ministry in Honduras each year.

Desiring to establish a local church and to be supportive of a full-time evangelistic effort in the Tegucigalpa community, and following an extensive search, it was decided to focus on Las Casitas, a small community about 10 miles northwest of Tegucigalpa and within close proximity to the Mateo Church. 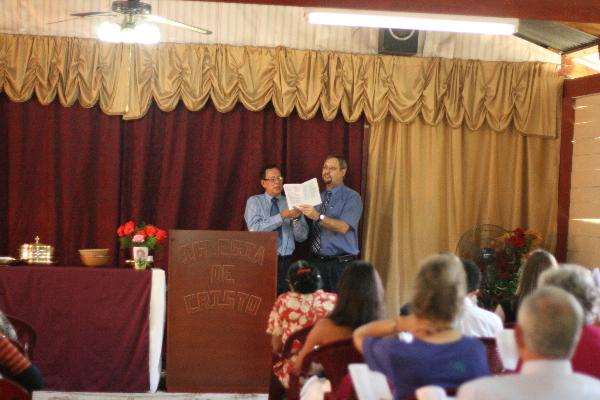 The 2004 mission trip focused on establishing relationships within Las Casitas.  That trip included a Gospel Meeting, the construction of houses for some in need, and a medical mission to serve the entire community.  The mission was well received and laid a firm foundation with the people of Las Casitas.

In 2005, University City hired an evangelist to work within the community.  The Church at Las Casitas had its official beginning with five families meeting for worship in the Las Casitas Elementary School.  God continues to bless this work and by the summer of 2006, the church had grown to about 100 people.  That summer the mission team constructed the first church building on property purchased in the village.

Since 2004, each year’s mission has included building housing for those in need, a medical mission to serve the community, and evangelism to save lost souls.  The mission teams have improved the church building to include a sanctuary, a large multipurpose area, a library, three classrooms and a church office.

Today the church is under the direction of local leaders from within the congregation and a new evangelist was retained January 2010.  Since 2005, more than 50 souls have been won for Christ and the church has become a vibrant growing community of believers serving Las Casitas for Christ.